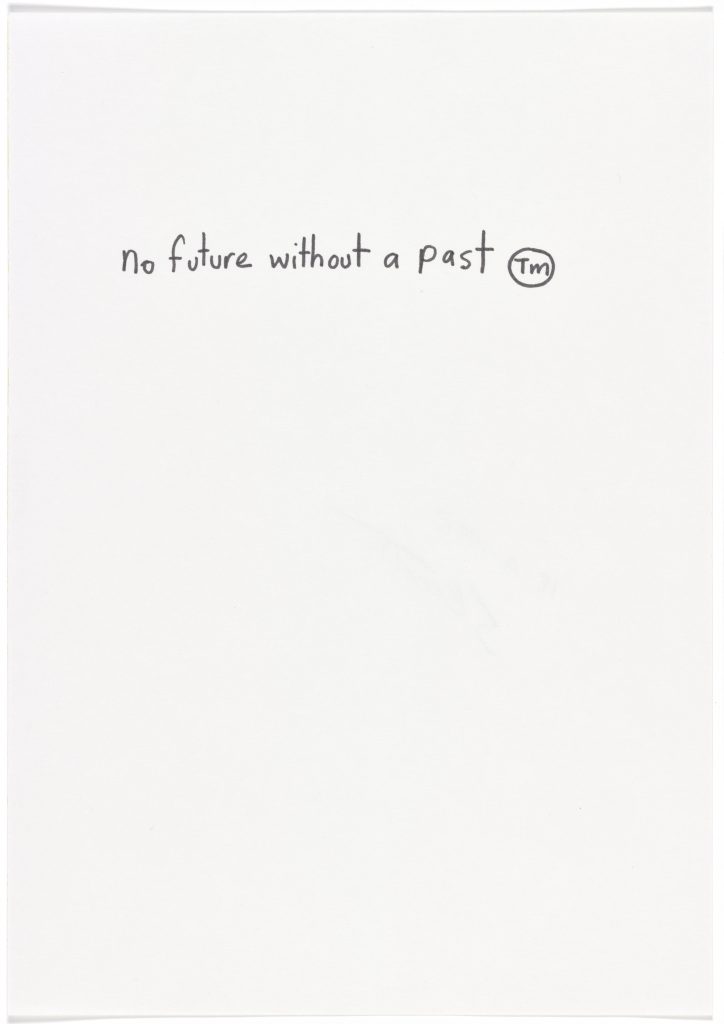 Untitled (No Future Without A Past)

Gordon Bennett: Figure of Speech, brings together works of varying media from the artist’s oeuvre, anchored together by their use of the written word.

The exhibition features paintings, works on paper and installations that are punctuated by diverse applications of the written word. Selected in consultation with the Estate of Gordon Bennett, and presented alongside excerpts from the new publication, these works demonstrate Bennett’s astute understanding of language as a force in the construction and expression of worldviews, as well as individual/communal identities and histories. As Tim Riley Walsh fittingly describes in Selected Writings, “Bennett’s art is equally traversed by reading as it is by looking”. 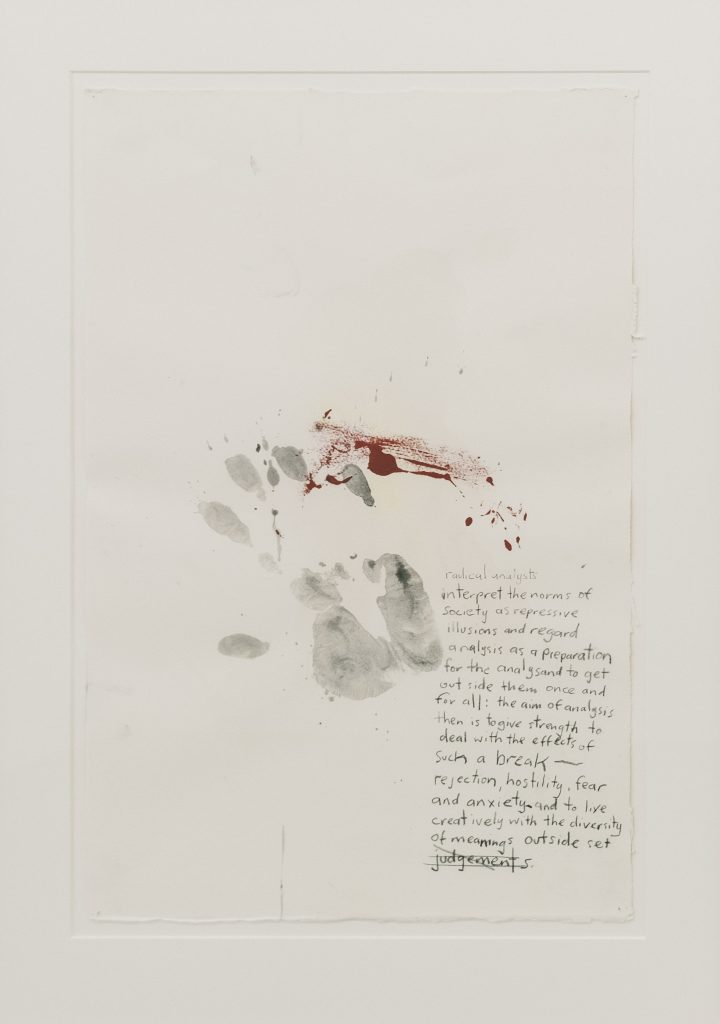 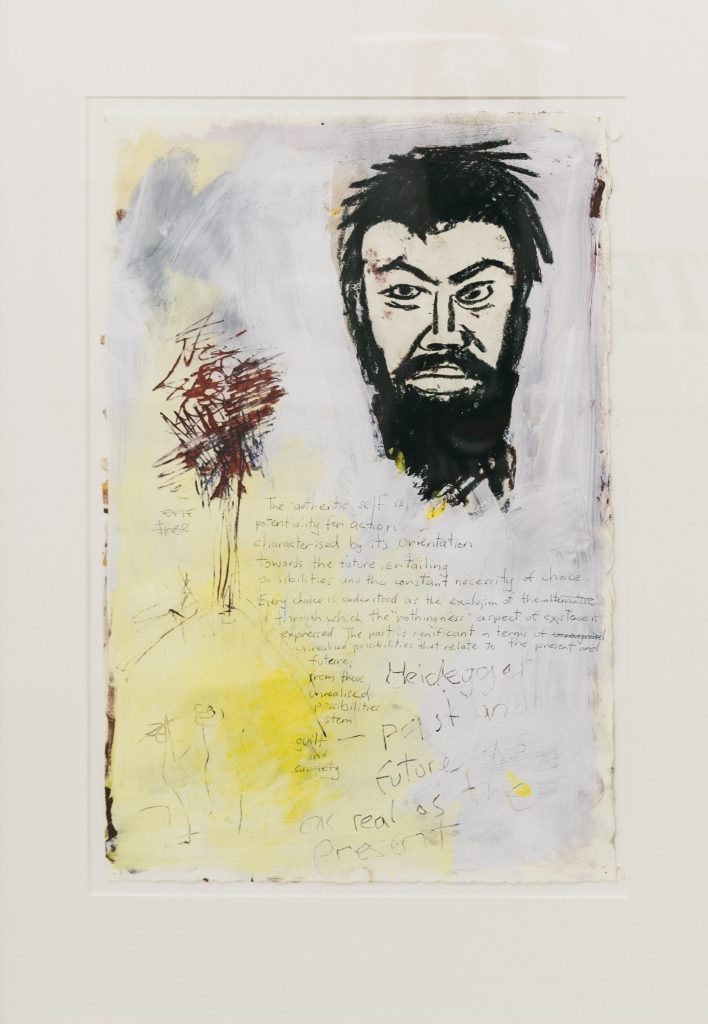 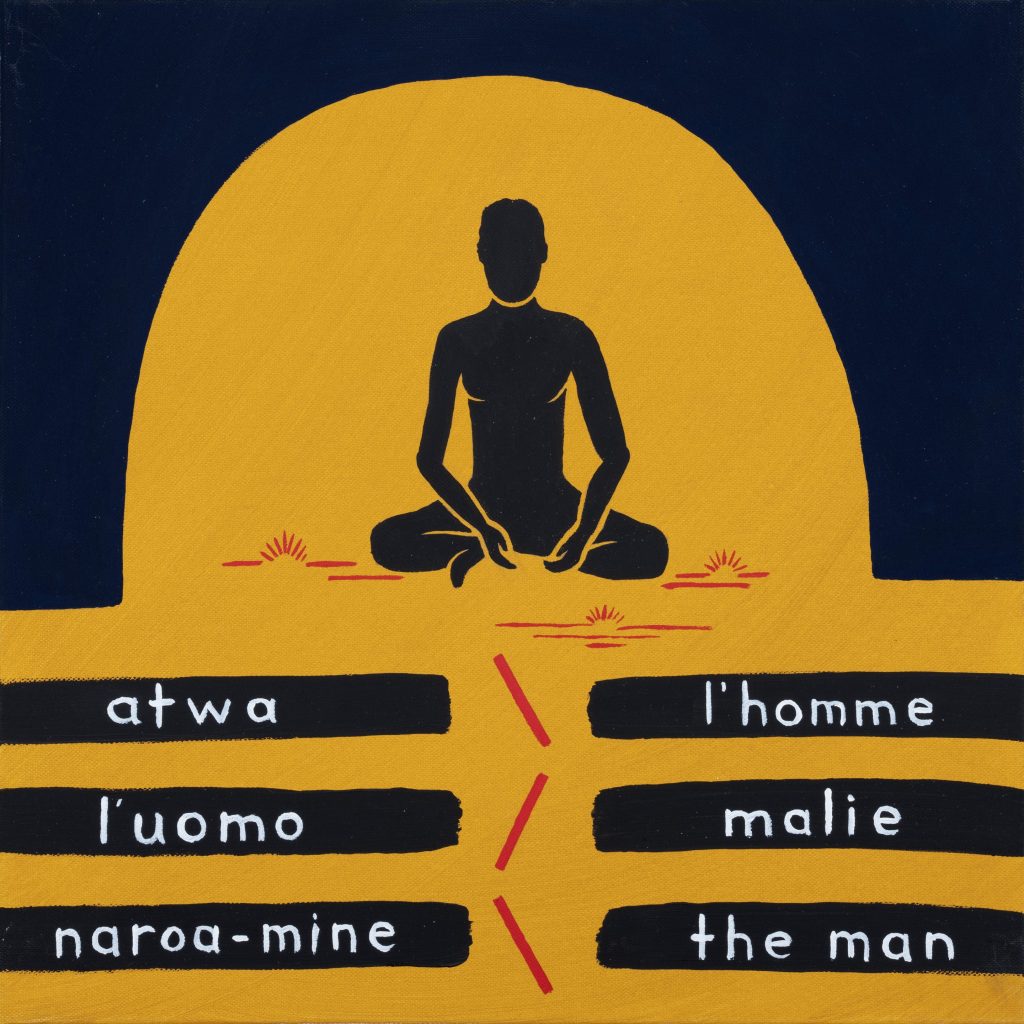 In the Relative/Absolute series I was thinking about the relationship between language and the object ‘in the world’ that it describes or refers to. The signifier and the signified. I was thinking of the relativity of language and the idea of the absolute—as in ‘complete; perfect’. Or as in free from limitations, restrictions, or exceptions—unqualified. For instance, the word water, the sound of the word itself as it is spoken, does not mean water, is not water the element itself, but is an arbitrary noise, an abstract sign that refers to, but is separate from, water itself. Whether you call it aqua, nukou, l’eau, gulli or whatever, it is still a thing that is life sustaining—a thing that exists with the same properties under different names (arbitrary signifiers)… 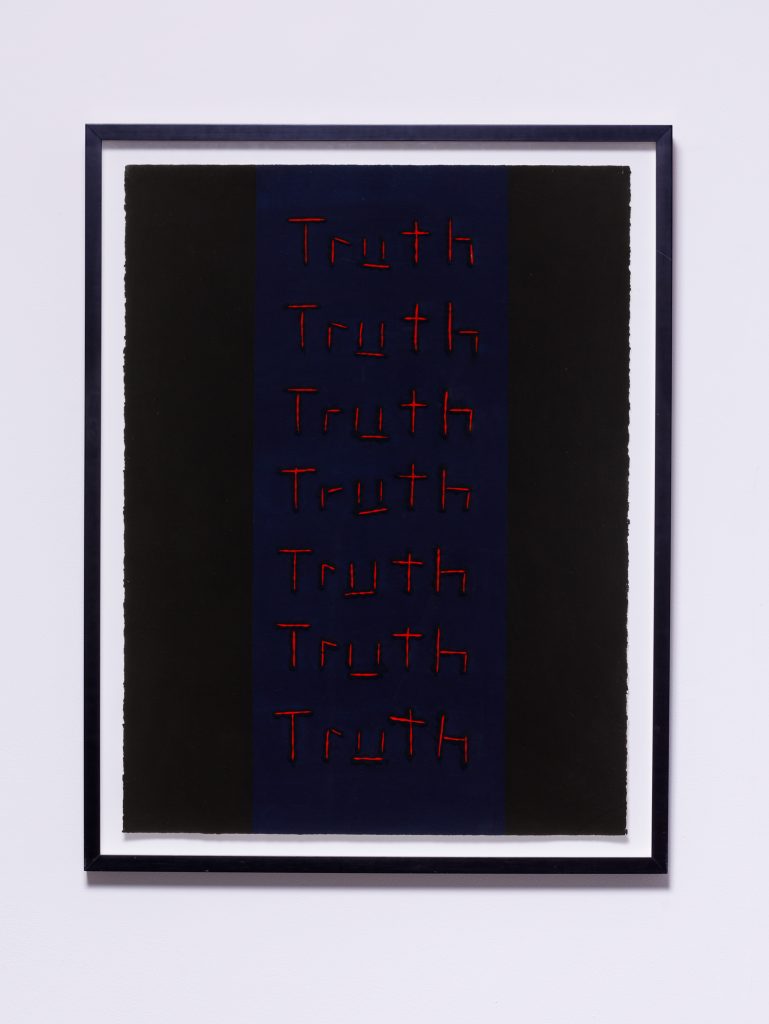 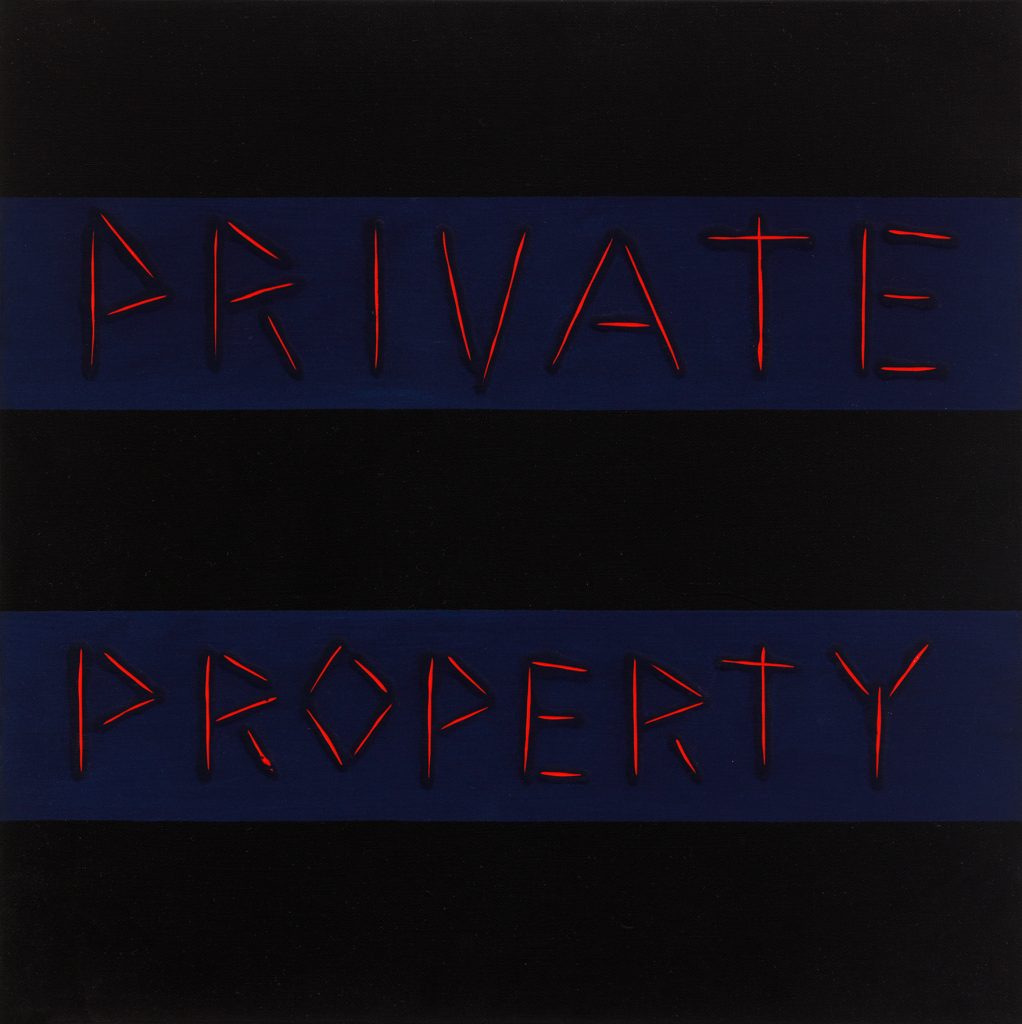 I ‘wrote’ words in cadmium red using a syringe so that when [the] paint dried, it left raised ‘welts’ or beads of paint. I painted over these words in a flat vinyl paint, a Prussian blue. I then cut into the beads of paint, making small slashes to reveal the red paint. The words are thus made up of cuts into the ‘skin’ of the paint. 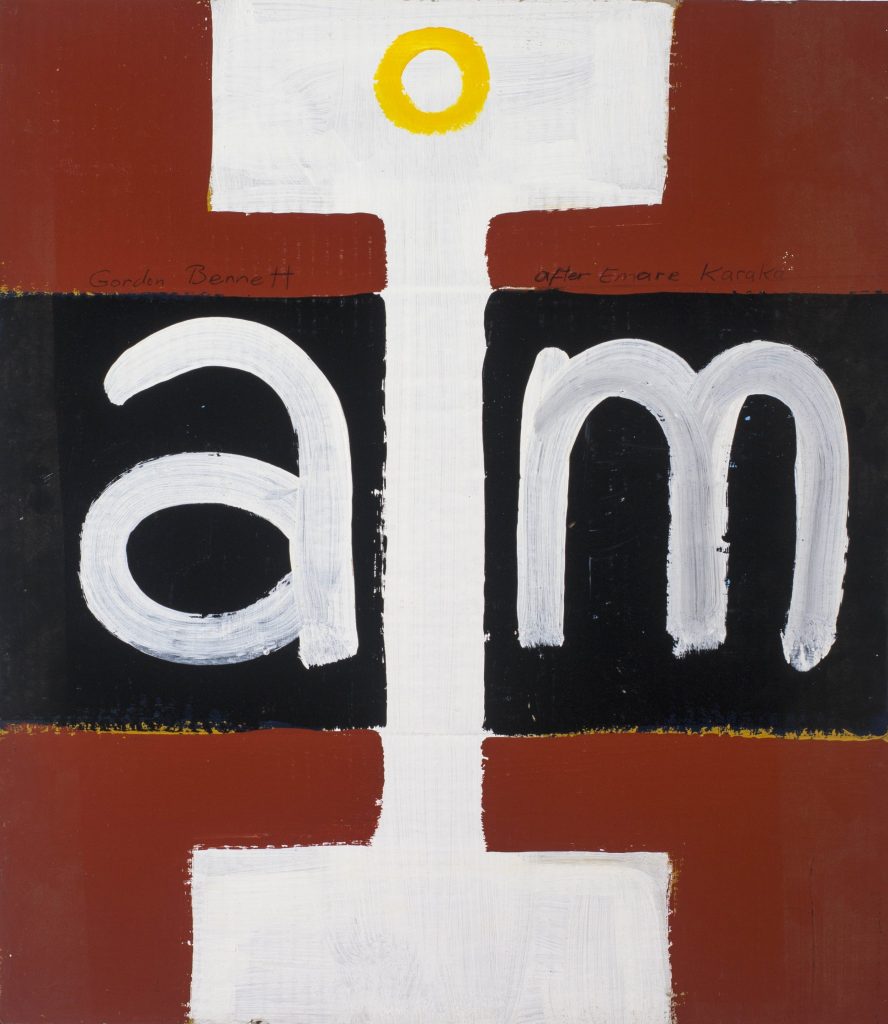 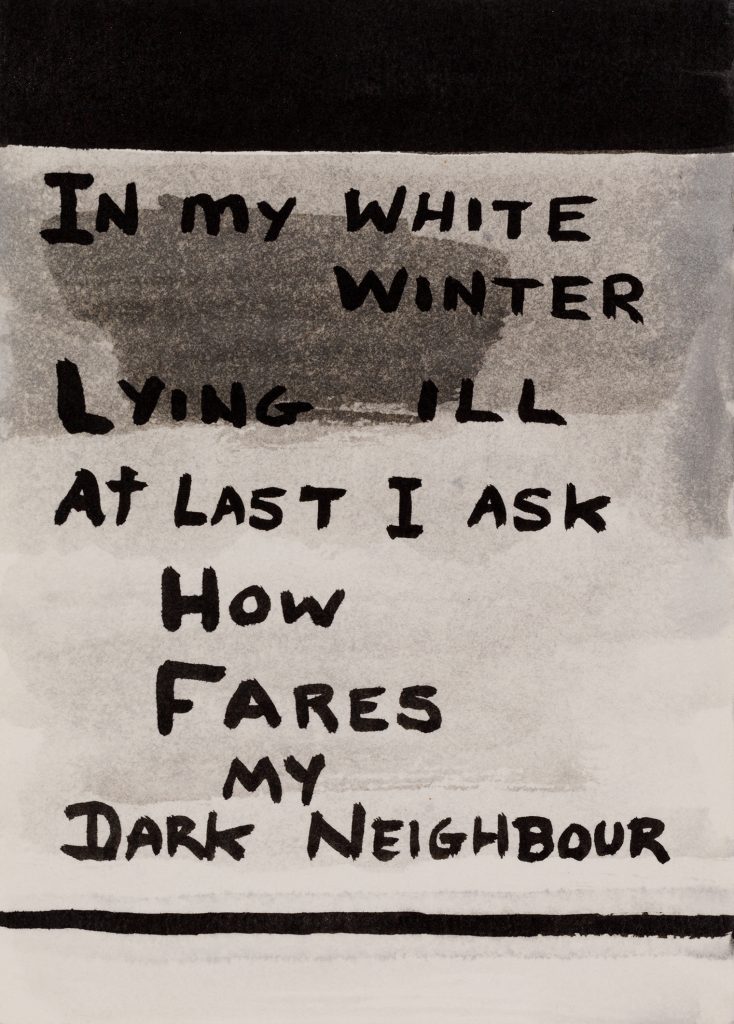 In My White Winter (After Colin McCahon)

In his 1993 work Ricochets; Manifest Destiny (A Painting for the Distant Future: 2001); and Window Onto a Shadow Universe, Bennett expanded his interest in written correspondence as a component of his artworks, incorporating faxes exchanged with Latvian-Australian artist Imants Tillers. Presented on individual canvas boards and accompanied by a tall, precarious stack of the same boards on the floor, the work expands upon their artistic sparring established with Bennett’s rapprochement of Tillers in his 1990 painting The Nine Ricochets (Fall Down Black Fella, Jump Up White Fella). Their correspondence, heated at times, discusses the prospect of their potential collaboration, with the work itself incorporating images and artworks drawn from their practices.

I found the essays on your work to be very enlightening in many ways, particularly in relation to issues of race and identity, and I found many similarities in your experiences and my own life experiences. Of course, there were/are huge differences also, but when the opportunity arose to show my work in New York, I decided to attempt to communicate with some of the ‘language’ of the New York context, via the appropriation and referencing of your work, to highlight the similarities and cross-connections of our shared experience as human beings living in separate worlds that each seek to exclude, objectify and dehumanise the black body and person.

The text reads something like spoken word lyrics or poetry. Poetry doesn’t seek closure on its meaning. I think it seeks to go beyond the words on the paper into a world of metaphor, allegory, images and ideas in order to say ‘something’. So … poetry, lyrics, syncopation (music—a beat—rapping), a remix. All part of it. 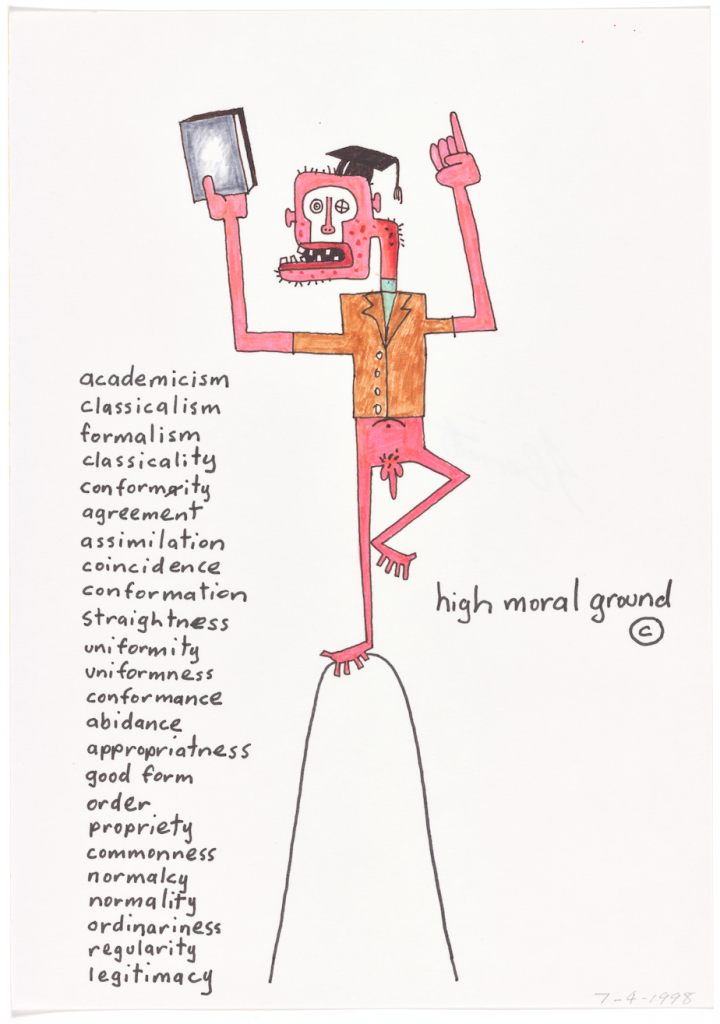 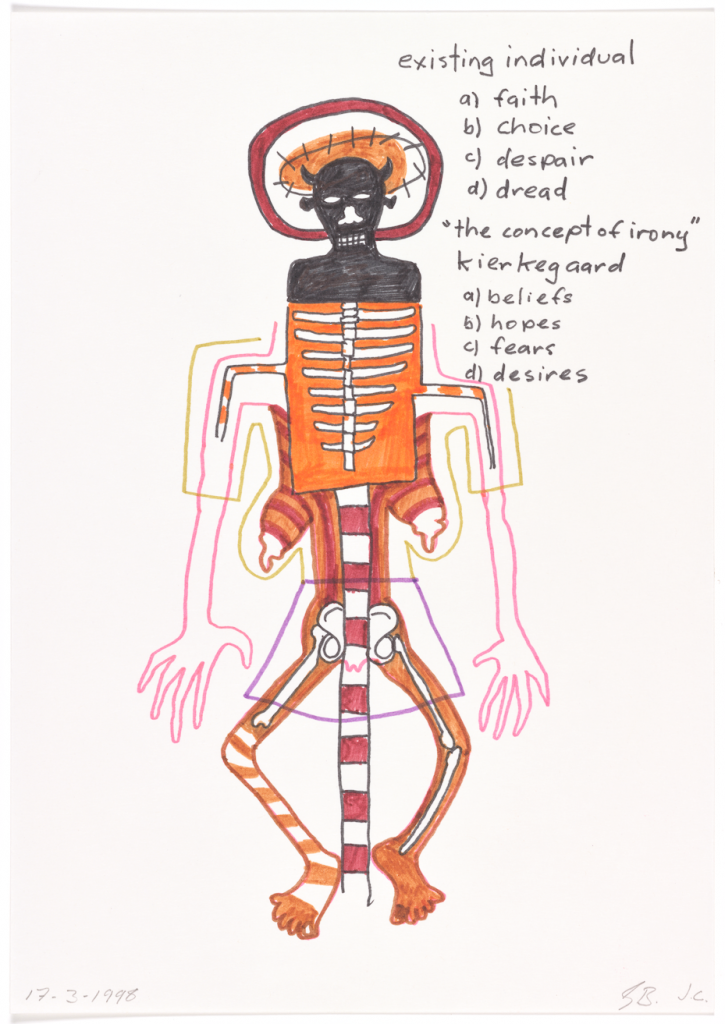 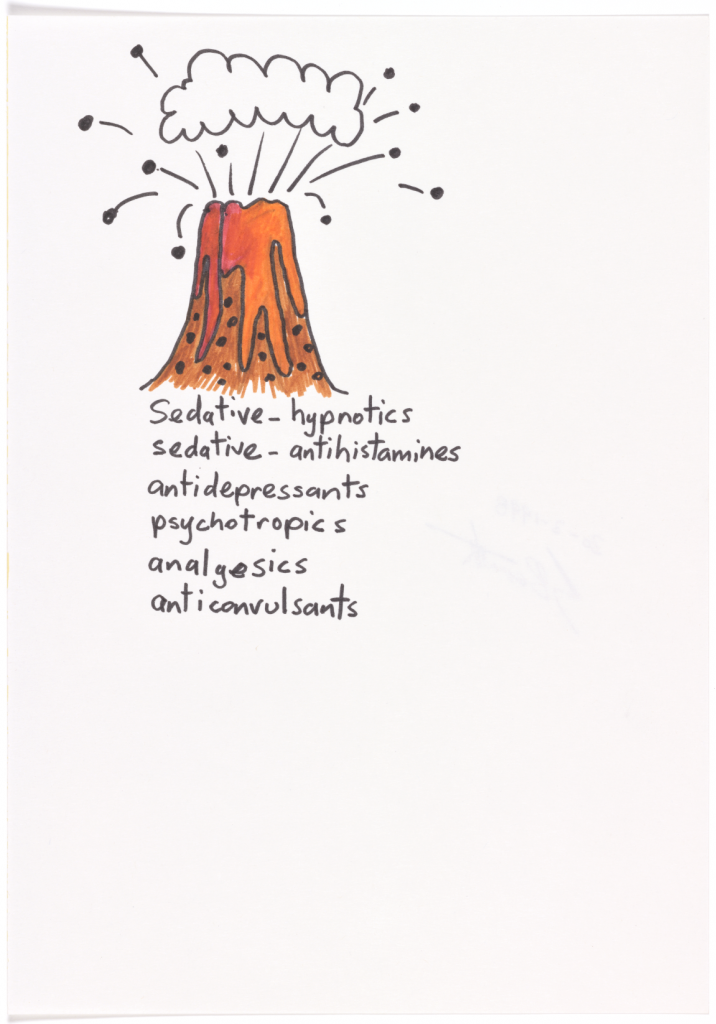 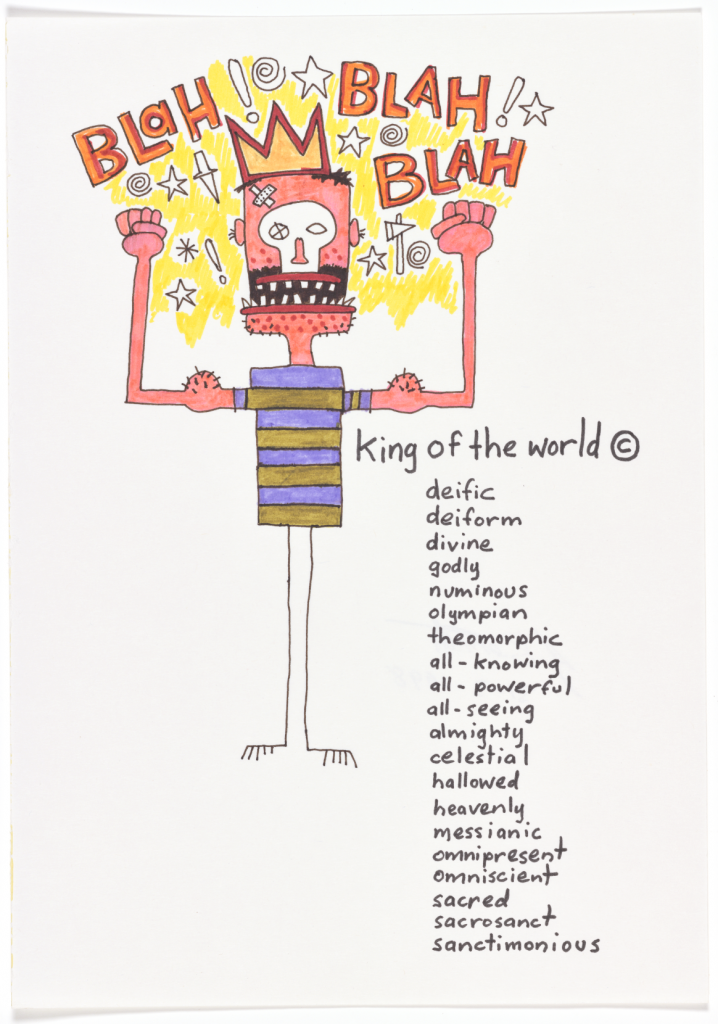 Untitled (King of the World ©) 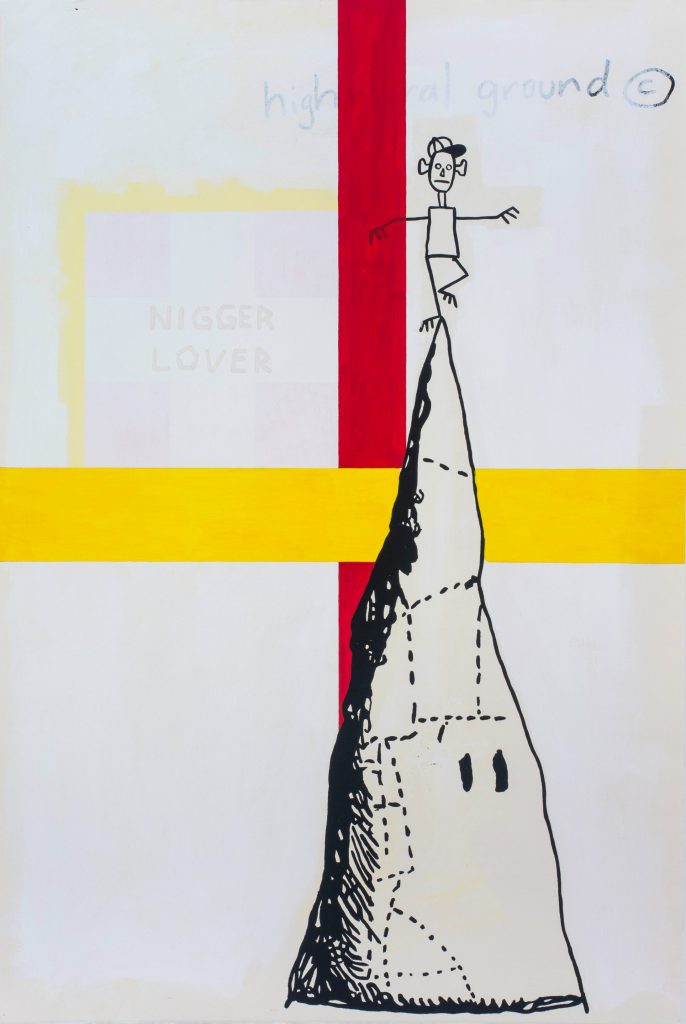 Language defines the invisible boundaries or limits to the understanding of the world of experience. It does not constitute a natural inventory of the world, but rather language is a system of conventional and arbitrary sounds and symbols that represents the culturally relative subjective human perception of it. Thus, a word does not represent an object in itself, it represents the image of the object reflected in the human mind. I am interested in this conceptual gap or ‘space’ between language as a representational signifying sign system and the world of objects and sensation this system signifies or refers to. 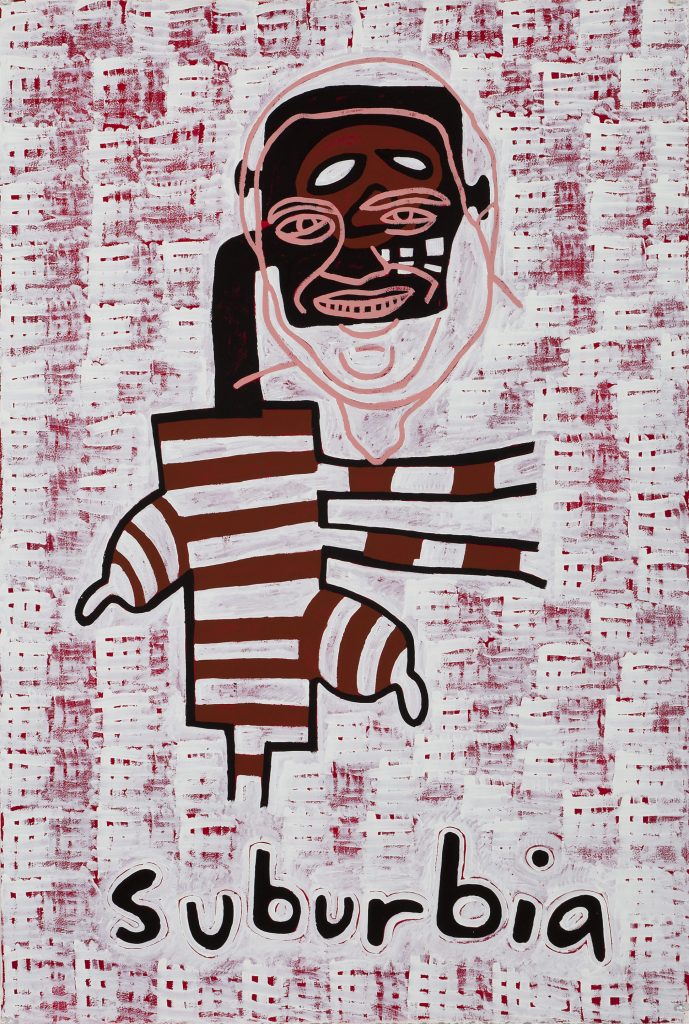 Unfinished Business: The Art of Gordon Bennett is the first large-scale exhibition of Bennett’s oeuvre since 2007. The exhibition showcases Bennett’s key series in depth, his most important and admired works, and includes many works which have rarely if ever been exhibited.

Gordon Bennett voraciously consumed art history, current affairs, rap music and fiction, and processed it all into an unflinching critique of how identities are constituted and how history shapes individual and shared cultural conditions. Audiences will experience almost 200 artworks ranging from installation and sculptural assemblage to painting, drawing, video and ceramics.

Gordon Bennett: Selected Writings brings together nearly forty published and unpublished essays, artist’s statements, letters, and interviews from across Bennett’s three-decade career, profiling the importance of the written word within the his art and broader intellectual practice. Offering new knowledge of his creative process, artistic influences and professional relationships, this project amplifies Bennett’s already significant contribution to subjects of race and identity in national and global contexts, as well as reaffirming his centrality to postcolonial discourse in the twenty-first century.

To launch the the co-publication by Power Publications and Griffith University Art Museum, Reading Bennett: The Artist in his Own Words brings together four speakers who will select pieces from Bennett’s archive to read, and will then respond to his words in the context of their own practice and/or scholarship. Kelly Gellatly will consider the artist’s shifting attempts to control his public identity; Dr Stephen Gilchrist will speak of being reintroduced to Bennett through his writing practice; Judy Watson will find parallels between her practice and Bennett’s; and Tim Riley Walsh will reflect on his project to find Bennett’s voice through the archive.