Kati Rule: In hindsight, presenting an exhibition like unfixed: σκιά σκιά σκιά, ombra ombra ombra, shadow shadow shadow, where multiple photographs and an artist book are shown in staged sequences that changes every two or three days, seems quite ambitious. While lockdowns and border closures have made art-loving audiences aware of the exhibitions and events we can’t experience, it’s true that even in the best of times, we often don’t see all the things we’d like to. You were conscious that the viewing conditions you imposed on the exhibition would – to some extent – confront this anxiety. However, since closing the show with only four of the nine planned iterations presented publicly, how do you feel now about these limitations?

Rudi Williams: The exhibition structure was an invitation for the audience to return and for those that couldn’t, the artist book – which contains reproductions of every image included in the show – was available to view in the office throughout the show. In committing to the idea of working with the duration of the exhibition, I was prepared to encounter surprises. Of course, it would have been ideal if the public had the opportunity to see the whole work, uninterrupted in the space, but the constraints posed by the pandemic were out of our control. I don’t consider this a failure but a mirror of the time the work was staged in and a reminder that change is natural, which was an original intention.

KR: Your approach to photography is very sculptural. Materiality and spatial awareness are evident in your prints, mounting and hanging methods, and the architectural and three-dimensional interventions you perform. Could you elaborate on what informs these considerations?

RW: The process of printing in the darkroom involves a lot of spatial awareness, especially printing in the colour darkroom, which is done in complete darkness. It is this tactile, immersive aspect of analogue processes that originally attracted me to photography. Working in the dark also brings an element of surprise to something that in its initial stage relies on sight. Travel also informs my spatial awareness. Experiencing historical site-specific artworks signified an important development in my practice, as it deepened my understanding of the relationship between art and architecture. I began exploring this idea in 2012, by visiting Caravaggio’s commissioned mural paintings in the Contarelli Chapel in the church of San Luigi dei Francesi, and in the Cerasi Chapel in the Basilica of Santa Maria del Popolo, in Rome. It was also after traveling to many large museums for the first time, that my attention was drawn to the way history is displayed and held in place, like the mounting of objects, which inspired me to make supports that referenced these structures. It is experiences like these, that continue to inform my work and my consideration of the environment as an expanded frame and resonant context for every artwork.

KR: From a practical perspective, how do you apply this approach to an exhibition?

RW: When working towards a solo show, I begin by reviewing the architecture and anomalies of the space. I return to spend time observing the movement of light, and the ways in which the outside world enters the room. I then select a point of focus, for example, in my 2018 Sutton Projects exhibition Echo: beneath the cataract lies a stain, I chose a remnant of the building’s history as an industrial printing workshop — a stain on the floor. This mark connected and emphasised ideas of the stain as an image in transition and the photograph as a focused, fixed stain. Linking these elements, prompted me to print images I had taken of different Aphrodite sculptures, each with a unique stain, and the exhibition unfolded from that point.

RW: No – my approach to this exhibition was different.

RW: unfixed as a concept within my practice, arose from experiments I was doing with unprocessed silver gelatin photography paper in 2012. For a period of time in 2017, I didn’t have access to a darkroom, and I produced the first unfixed artist book as a way to incorporate these paper experiments with photographs from my archive. The book that accompanies the exhibition is a distilled version of the previous three books.

RW: Yes. Although all my work is connected, I wanted to specifically reflect on the form of the books and my unfixed experiments, in the durational format of an exhibition. I decided to present groupings of photographs in different iterations over the course of the show. I first selected images from my archive that displayed continuities and connections between the body, time, place, and memory. Identifying alignments enabled me to explore the links and threads that emerged between the images, while reconfiguring the photographs, reflected on the subtleties of these connections.

KR: At what stage did the configuration of images in each iteration become apparent to you?

RW: This varies. Often the images themselves are a result of chance, the photograph taken in Rue Bonaparte is an example of this; a fraction of a second before or after, and the moment would have passed. Some iterations stemmed from pairings that occurred to me while photographing. The moment when I encountered by chance the Janus bust in the National Archaeological Museum in Athens in 2019, I knew I would pair it with the Janus sculpture I had photographed at the Istanbul Archaeological Museum in 2014, to emphasise the similarities between the two. It was the same case when I photographed the woman with the butterfly resting on her back in 2018 at Melbourne Zoo. I knew then if the image turned out, I would eventually pair it with the photograph I took at the Louvre in 2014, of a small sculpted torso that had a hole in its back. The pairing of the clocks in the Zurich shopfront and the votive plaques hanging in the National Archaeological Museum of Athens happened when working on the first book. Together, the works connected my thinking between the innate time we hold in our bodies and the healing and gratitude that the votive plaques signified, as offerings to the gods.

KR: You work consistently with images of historical sites, museums, and collection-based artefacts. What is it about these contexts and materials that appeal to you?

RW: I am drawn to any visual evidence of history. That’s what attracts me to experimenting with light-sensitive paper – as it absorbs and responds to the environment and the way it is handled – it becomes an artefact of experiences. I am always looking for residues of humanity and signs of decay. The visual interruptions, whether they be a smudge, stain, shadow, remnant, or reflection, are the traces of life I find compelling and beautiful.

KR: Central to your practice is the process and materiality of photography. How do you combine this with your ongoing consideration of the relationship between time, memory, and experience?

RW: Processing a roll of film is a good example of how the medium generates unexpected results, while exposing any disconnect between experience and recollection. In 2013, I made a series of black and white Mural prints that are enlargements of consecutive frames in a roll of film. I printed the natural sequence of the frames, as a map of the choices I made at the time. These works reinforce the perception of my practice as an accumulation of ideas and experiences, and the photographs I create operate as an anchor point or pathway between the past and the future.

RW: Repeating the word shadow in Greek, Italian and English is a reference to my cultural heritage, and my previous exhibition Echo, where historic and contemporary forms of photography were connected by the depiction of absence. I was thinking about a shadow’s relationship to early photography and the silhouettes that form on the unfixed paper inside the book, as echoes of images. For me, the title draws a parallel between language and photography and how for both, repetition can shift meaning.

*This conversation took place via email during September and October 2021. 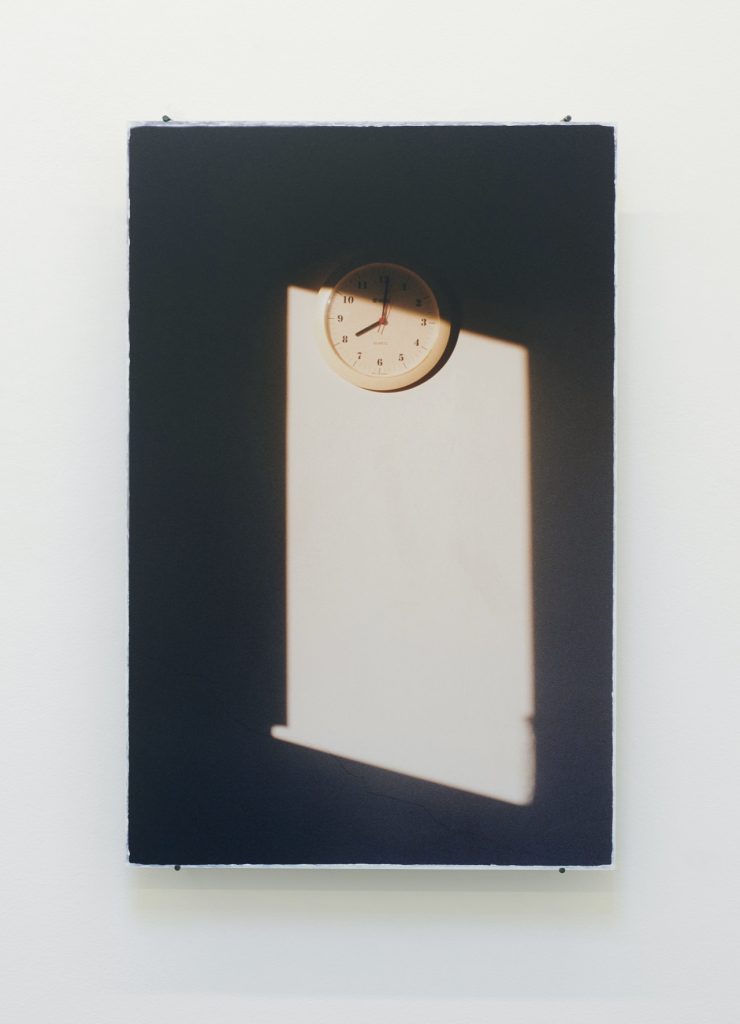 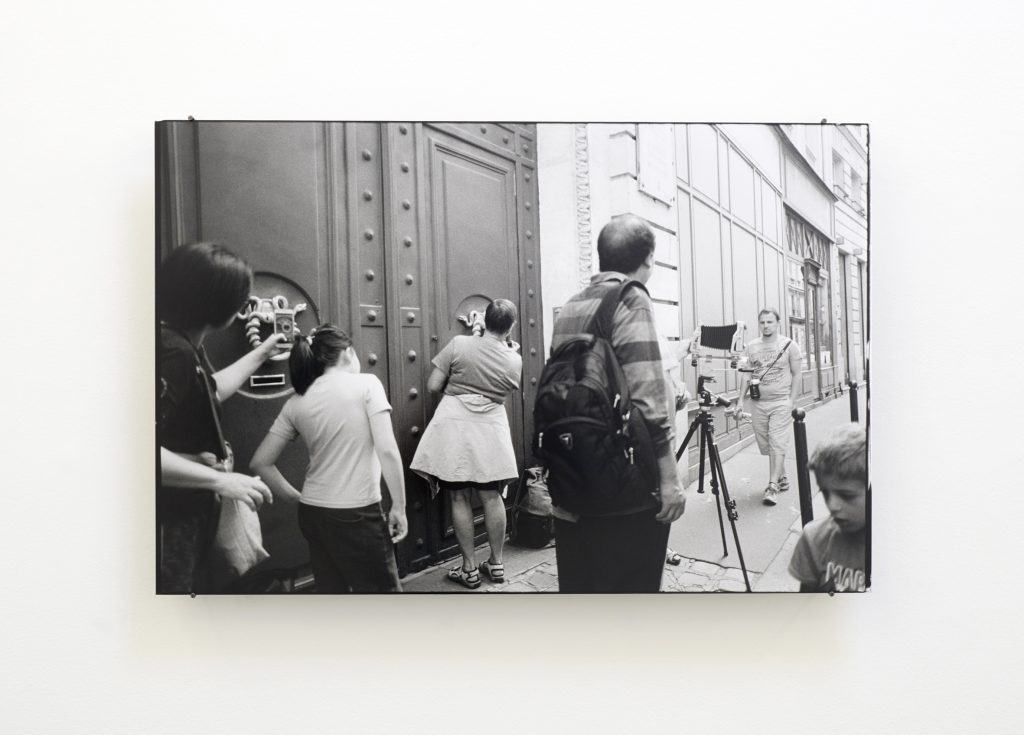 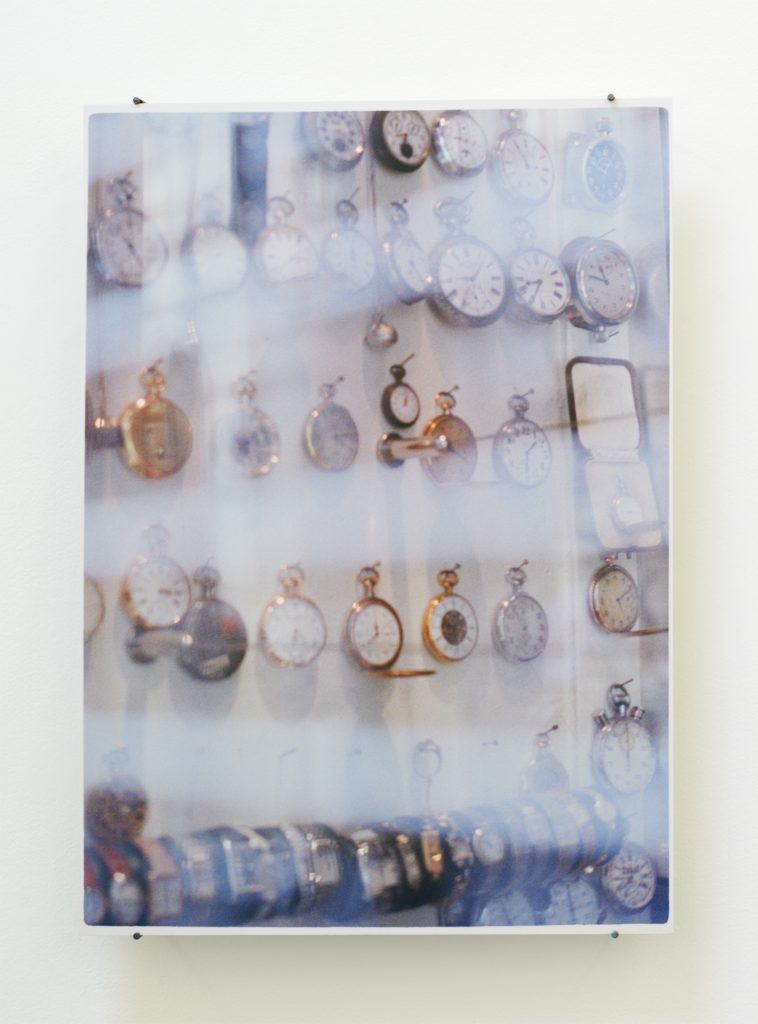 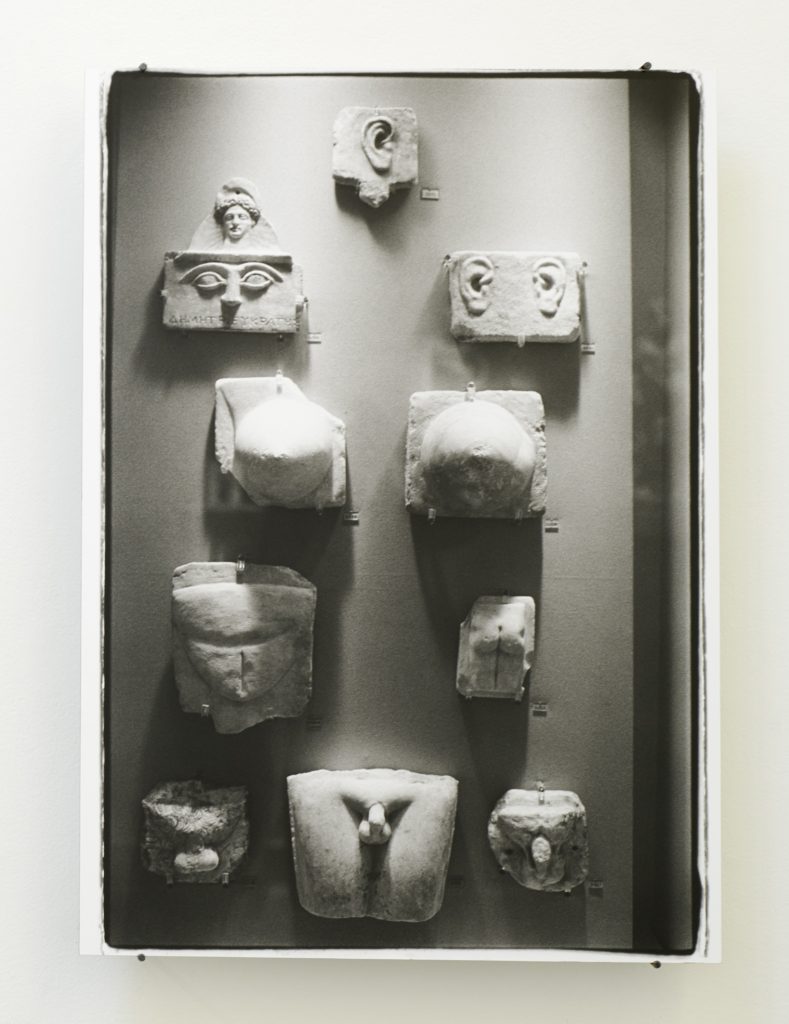 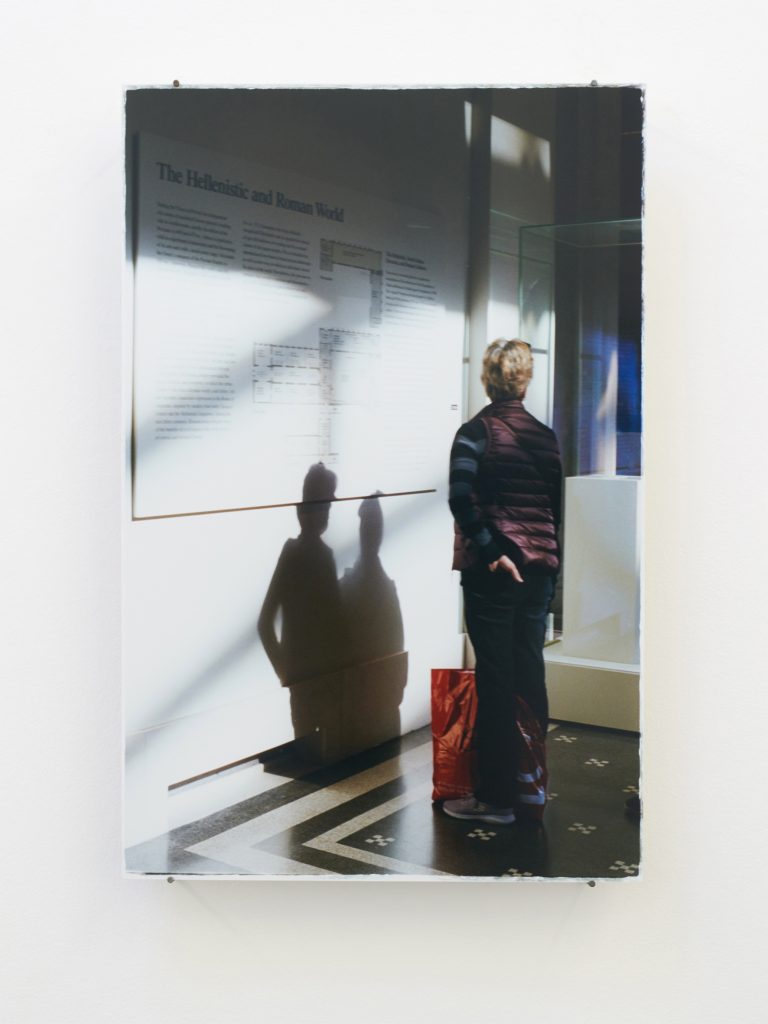 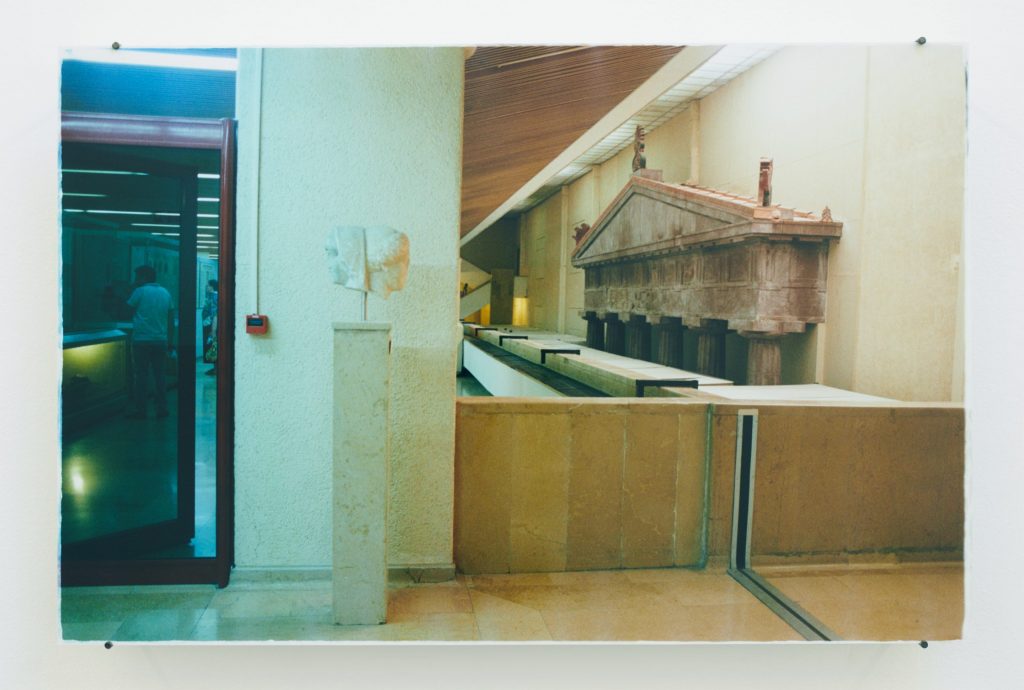 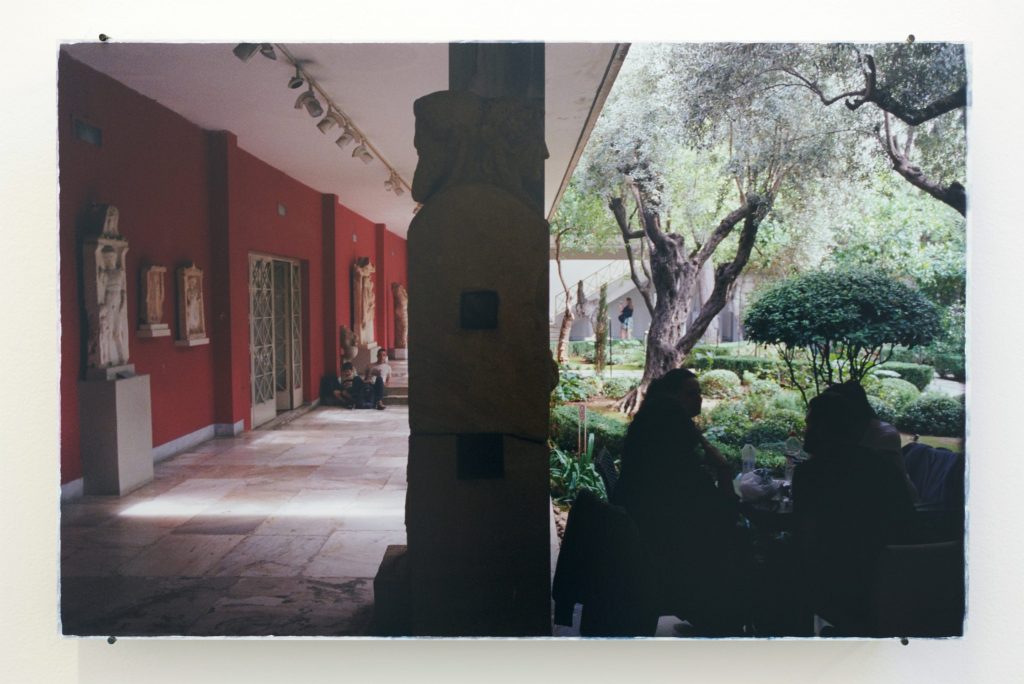 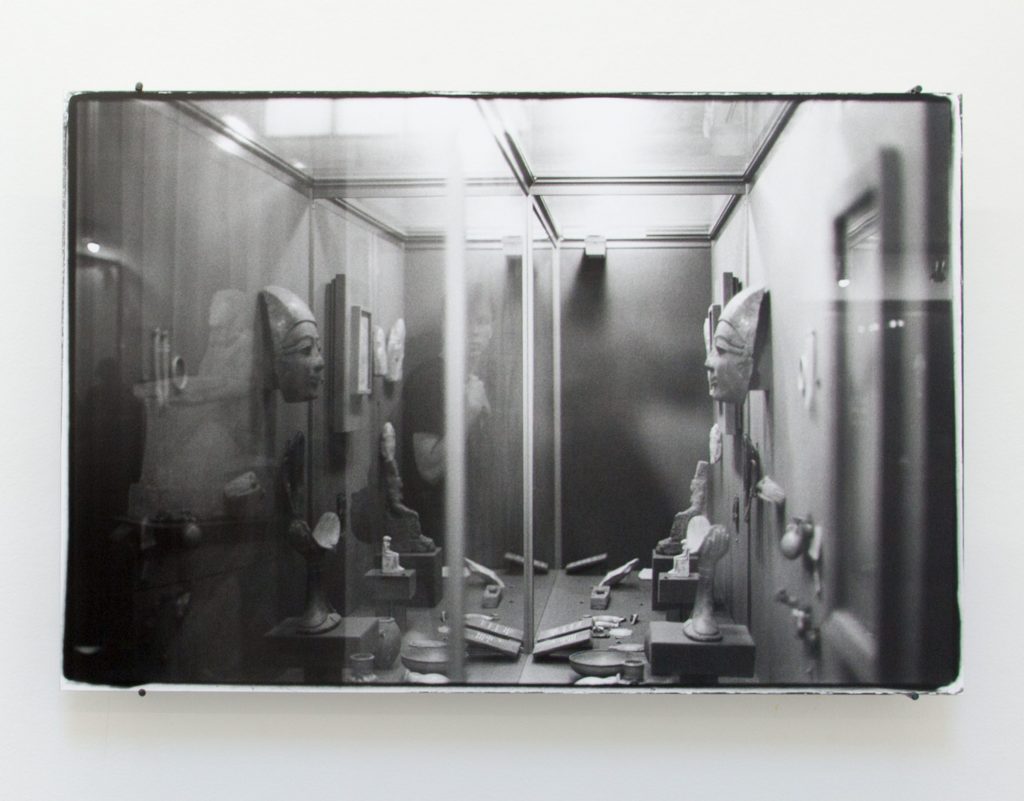 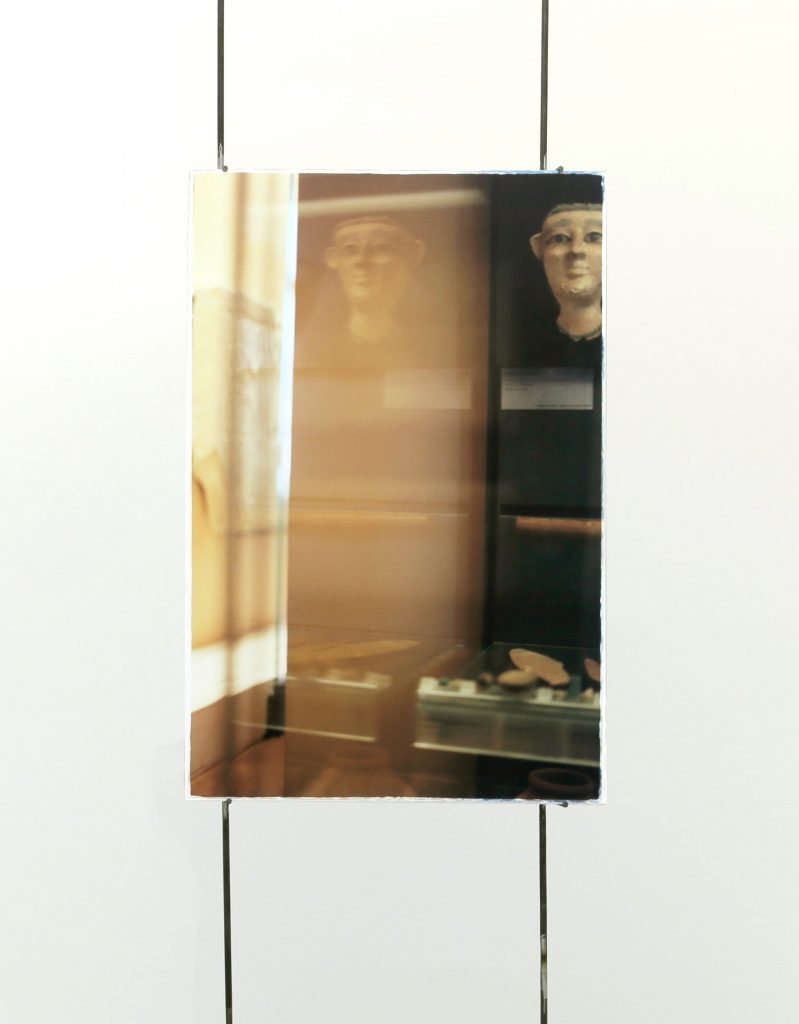 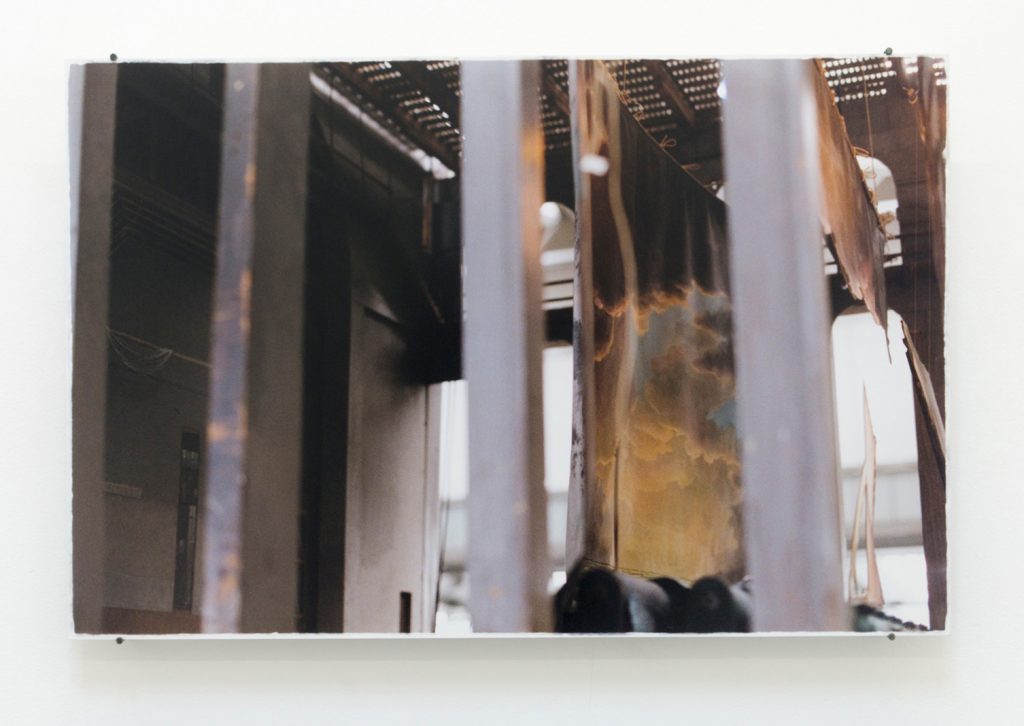 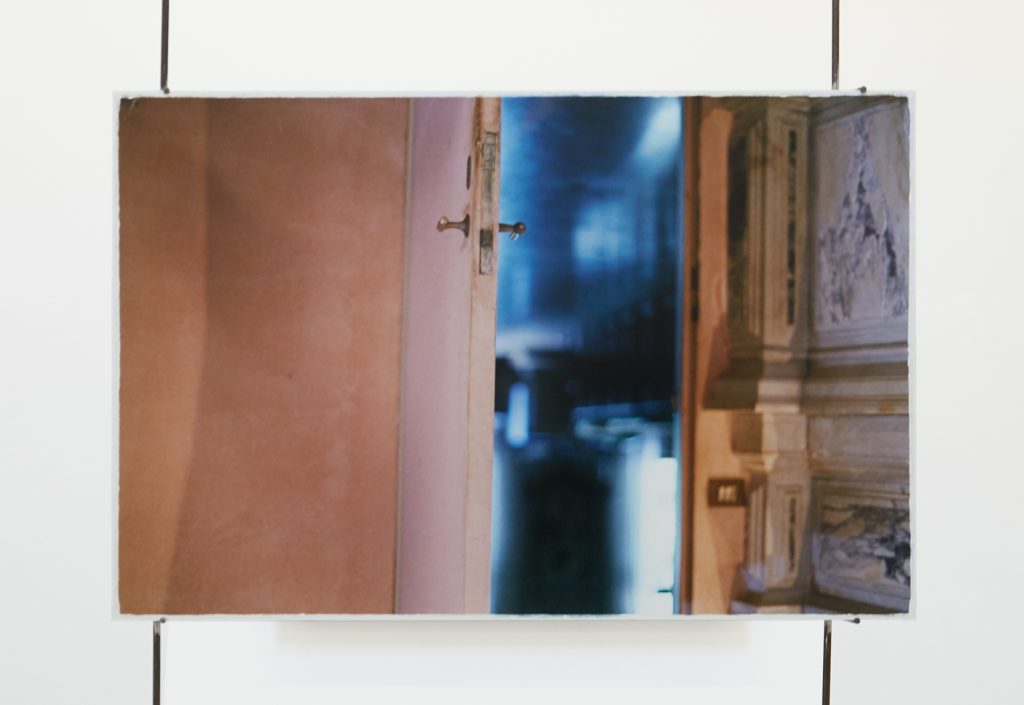 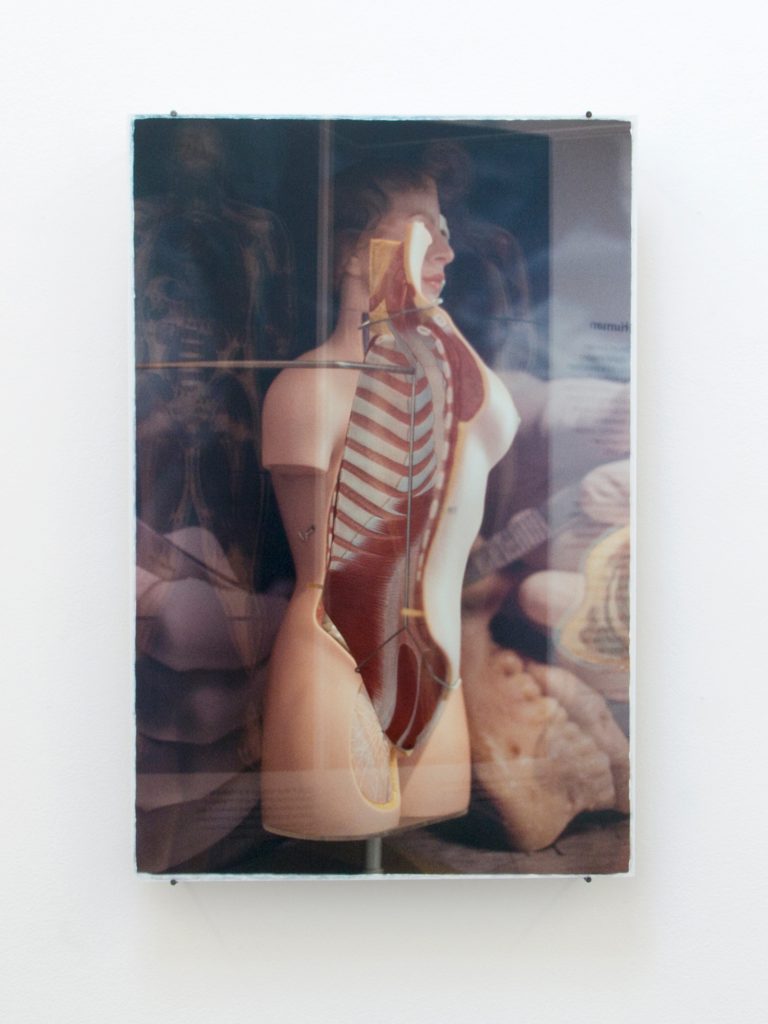 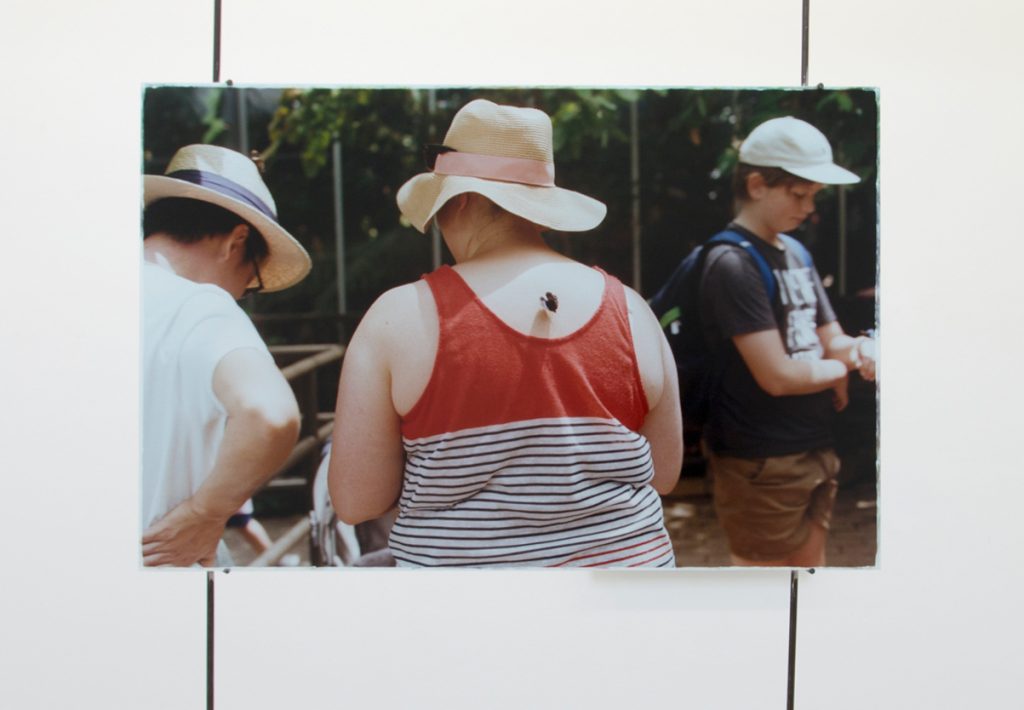 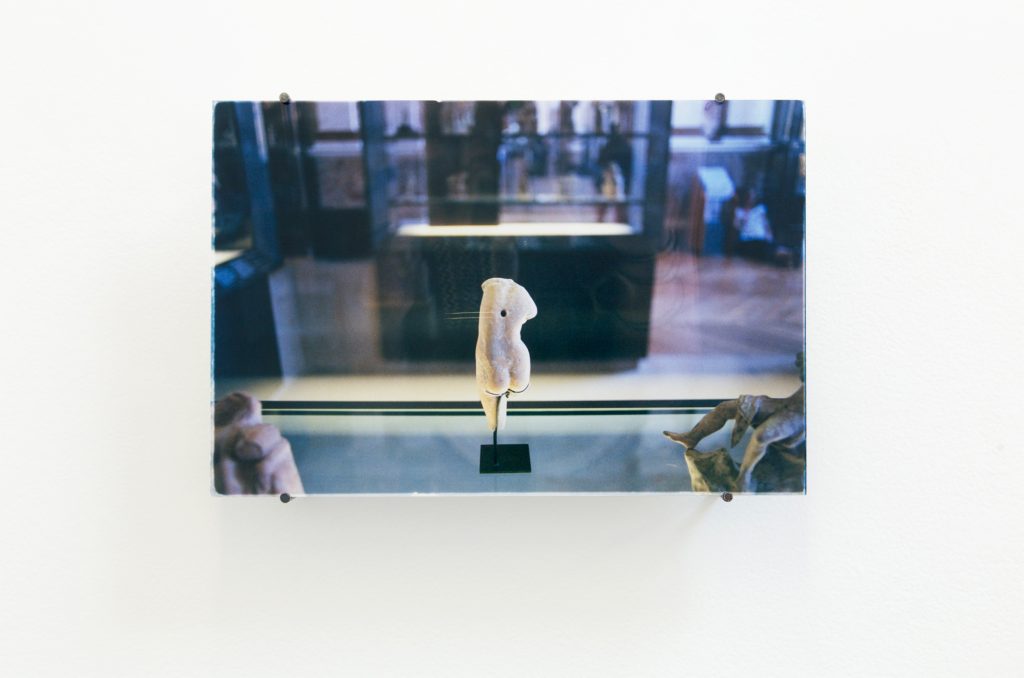 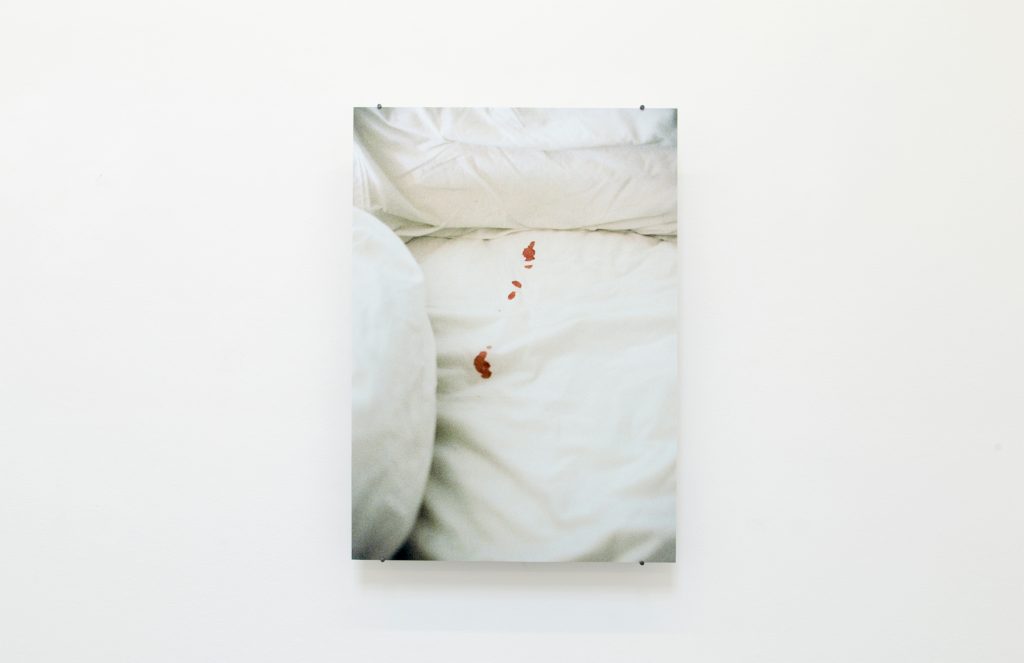 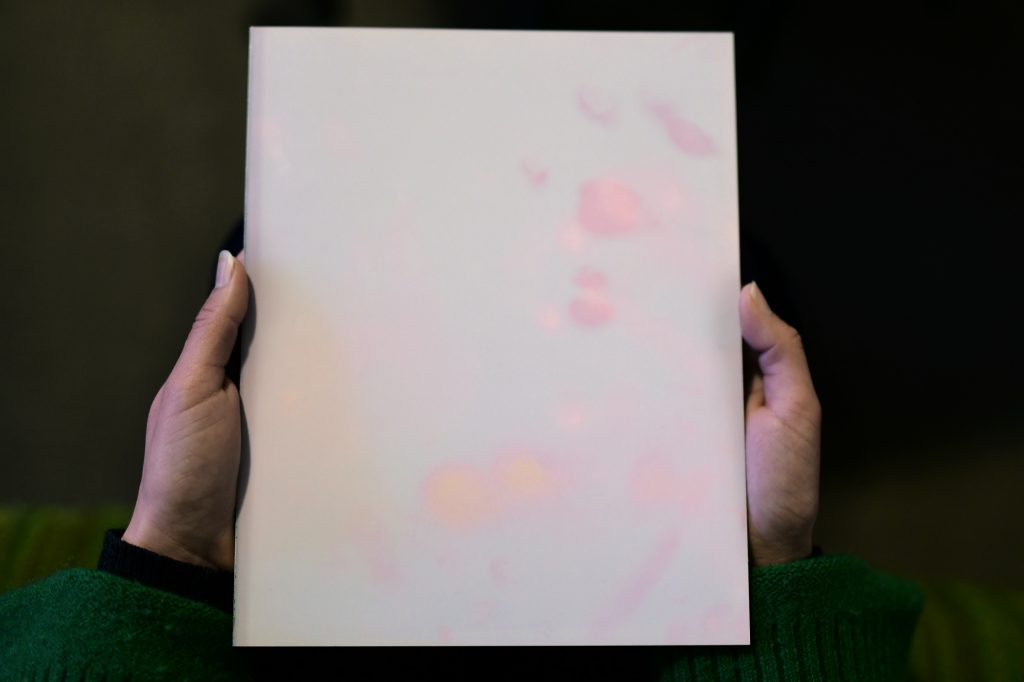 unfixed: σκιά σκιά σκιά ombra ombra ombra shadow shadow shadow (2021) is a self-published artist book, released to coincide with her eponymous solo exhibition at Sutton Gallery, Melbourne. Adapted in this instance as a record of the works in the exhibition, it is simultaneously a catalogue and an active artwork.